Back to work for the first week of the new year we came across a job that we don’t see every day but is fairly common nonetheless. One of our team members was called out to take a look at a couple of evaporator coils that were cooling three separate wine cellars. Three cellars that were chilling hundreds of thousands of dollars of wine!

The units used to chill the cellars were not all that old but the coils were beginning to fail due to the high level of stress they are put through. See, these coils don’t have a 9-5 job, they are working 24/7 – 365 to make sure the cellars stay at a constant temperature. 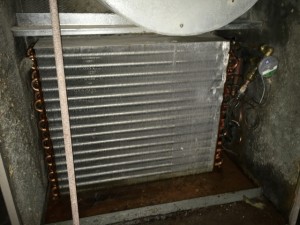 The long work hours combined with the harsh environment lead these coils to deteriorate much faster than your typical application.

We were able to provide the customer with a quick quote that will save them thousands over replacing the entire unit.

Get a FREE Online Quote